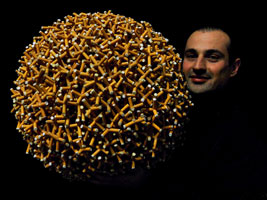 Lorenzo Filomeni was born in Turin on 28 December 1978. For professional reasons of his father he moved to Rapallo with his family in 1982, returning to Turin the following year.
When he was twelve, his family moved to Milan, where Lorenzo finished school and went on to graduate in law. Lofilo, the pseudonym adopted by the young artist, was overwhelmed by his passion for making art, and abandoned his promising future as a lawyer to devote himself exclusively to this.
Actually he lives and works in Marina di Pietrasanta (Italy).